Bhutan Wild Cordyceps sinensis is a highly sought after medicinal mushroom that grows 5000 meters above sea level in the Himalayan region. Here is everything you need to know about cordyceps from Bhutan. 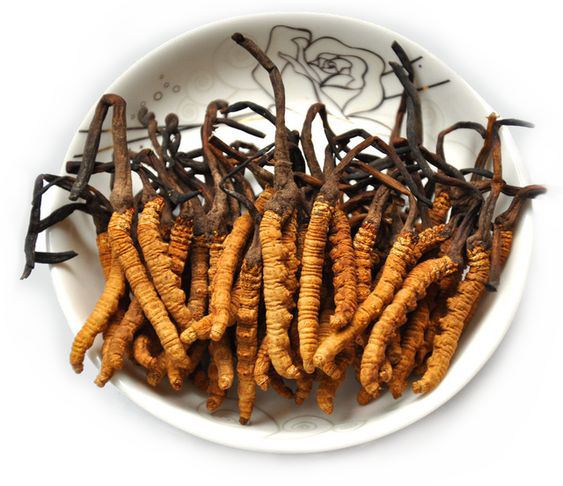 We source the highest quality of Bhutan cordyceps

Responsibly sourced cordyceps from legal auctions in Bhutan. All cordyceps you buy is certified and authorized by Bhutan Government

Want to know more about cordyceps?

Please subscribe with us to receive more details about cordyceps

Thanks!
This field is required

Bhutan wild Cordyceps Sinensis is a highly prized and sought after medicinal and aromatic mushroom that grows in the Himalayan region. The cordyceps from Bhutan grow at elevations of above 5000 meters above sea level. The name Cordyceps comes from the Latin words “cord” and “ceps”,

meaning, “club” and “head”, respectively .The Latin word accurately describes the appearance of this fungus, whose stroma and fruit body extends from mummified carcasses of insect larvae, usually that of the Himalayan ghost moth belonging to the genus Thitarodes. In Bhutan and Tibet, it is called ‘Yartsa Gunbub’, the literal translation of the name is “summer grass and winter worm”. Cordyceps appear annually between the months of April and August when it is harvested.

There are no scientifically studied reports on lifecycle of Cordyceps. However it has been reporte that in late autumn the fungus infects the larvae of ghost months, but how the fungus infects the caterpillar is not known. There can be three possible ways of infecting the larvae: 1) Caterpillar ingests a fungal spore; 2) Fungal hypha penetrates a spiracle of the insect; or 3) an ascospore or a conidium germinates after getting in contact with the larvae.

Cordyceps thrives only at altitudes above 3800 meters in the cold, grassy, alpine meadows on the mountainous Himalayan Plateau of Bhutan, India, Nepal, Tibet and the modern Chinese provinces of Sichuan, Gansu, Hubei, Zhejiang, Shanxi, Guizhon, Qinghai, and Yunnan. Cordyceps is the most diverse genus in the family Clavicipitaceae in terms of number of species and host range. There are estimated to be more than 400 species of Cordyceps, although this is expected to be an underestimation of the global diversity. Ophiocordyceps sinensis is the most widely collected.

The fungus has been recognized as a medicinal product in China for at least 2000 years and the fungus is a coveted medicinal product in traditional Tibetan and Chinese medicine, and is known in the west as “Himalayan Viagra”. Cordyceps is found to be effective against tuberculosis, leprosy and human leukemia in several trials conducted in China, Japan and elsewhere in the world. According to Miller (2009), it reports that Cordyceps help reduce tumor size and improve liver functions and helps infected kidneys recover. Also, it has been found that Cordyceps improve respiratory functions and blood circulation.

Why Cordyceps from Bhutan

Environmental conditions is one of the key determinants of the quality of cordyceps. Bhutan cordyceps are harvest from the Himalayas in natural environments above 3000+ meters above sea level with no human settlements.

Cordyceps grading can vary depending on the size or the total number of pieces of each cordycep in every gram of weight. However, research has found that the best quality of cordyceps are those with intense eyes which contains higher ingredients.

In terms of the physical apperance, the body should be plump and yellowish brown with 8 pairs of legs and the fungi section should be intact with the shoot.

After the legalization of the harvesting of Cordyceps by the Royal Government of Bhutan, in the year 2004, it is harvested extensively in the alpine meadows of the country. Cordyceps has been a resource for Bhutanese traditional medicine for many years. Since the habitat of Cordyceps is in the high alpine areas of the national parks and near the border of Tibetan Autonomous Region of China, direct protection of the species has always been a great problem due to the inadequate number of forest personal in those areas, making it difficult to monitor unauthorized harvesting. Prior to 2004, harvesting of Cordyceps was allowed only in Lunana.

But, in 2004, the policy allowed the limited collection of Cordyceps by the yak herders whose herds traditionally graze in the pastures where the fungus occurs through a Royal Decree issued on 17th June, 2004. Various measures are put in place to restrict the overall harvest including a ban on collection except during the months of mid-May to mid- June. From 2008, the policy of letting only one person from each household to harvest the fungus was lifted allowing every person from a household to collect, and again from 2009, a new rule of issuing the permit to only 3 persons from each household was enforced.. Many of the harvest sites in Bhutan are near the border areas of Tibetan Plateau, which makes it easier for the people from the other side of border to harvest Cordyceps illegally in Bhutan. This trend continues, even with the strict monitoring by the forestry and army personal of Bhutan.

For the harvest of Bhutan cordyceps, only households belonging to that specific regions are allowed to collect in their locality. Every household is given an opportunity to harvest cordyceps within their administrative jurisdiction.

When it comes to harvesting, only handpicking is allowed to ensure there is minimum damage to the environment.

For the sale of cordyceps, it is only sold through auctions conducted by the respective Governments officials of each district. Only local vendors are allowed to participate in the auction and once sold, all quantities of sold and unsold quantities must be declared. Sale into the local market is only allowed after the auction period ends and after the government royalty tax is paid.

In Bhutan, several vendors have ventured into developing retail and consumer products from Bhutan wild cordyceps. These products are readily available in the market for purchase and Druksell is proud to present the products for international markets. 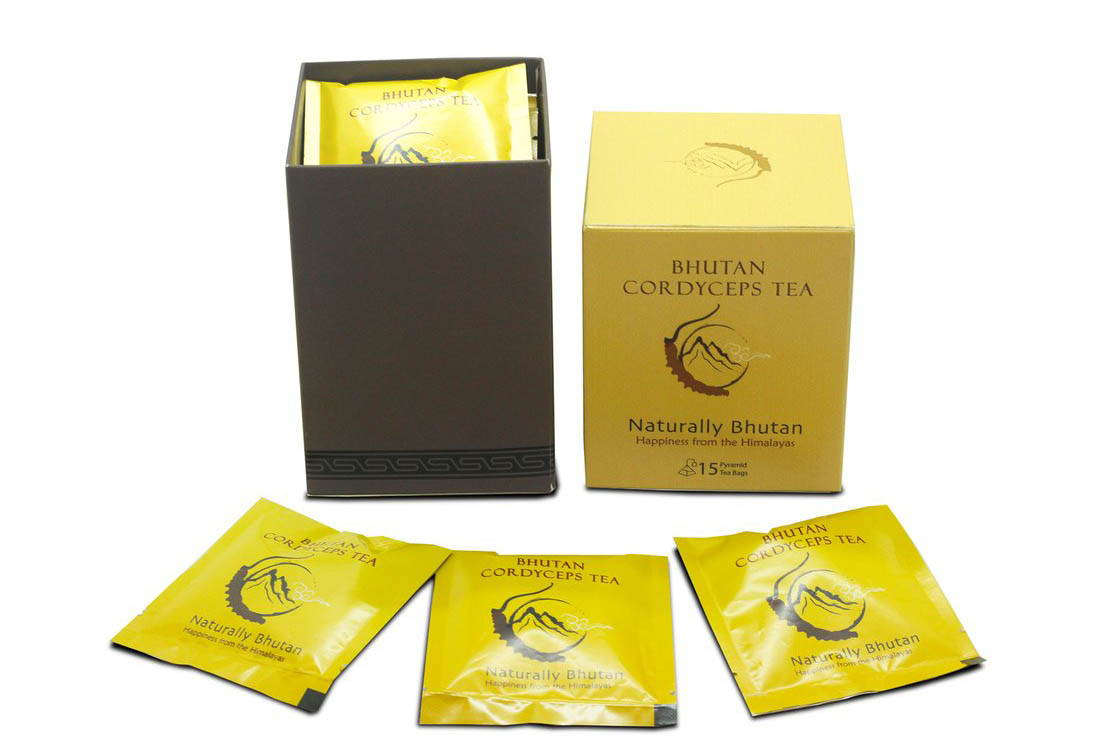 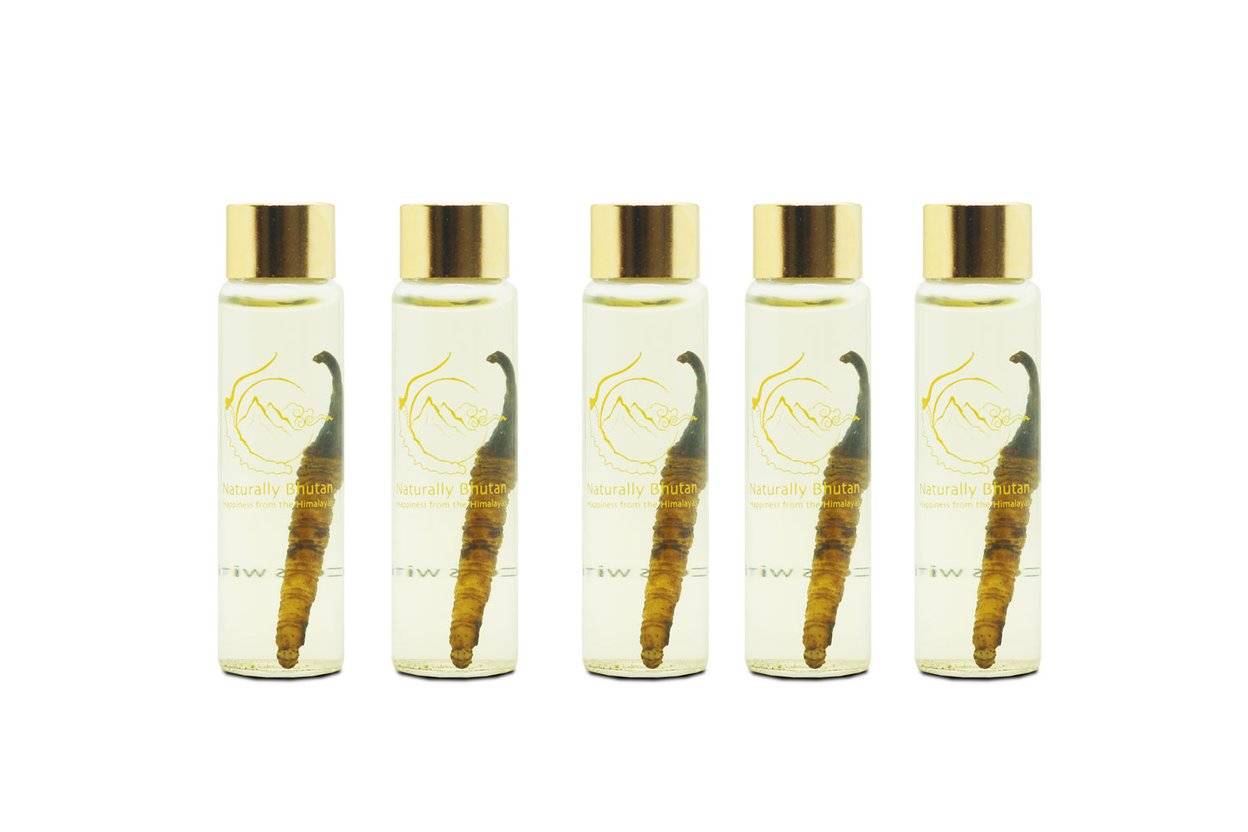 A unique way of consuming cordyceps to extract its benefit to the fullest. Cordyceps soaked in local rice wine 'Ara' is strong form of cordycep tincture. 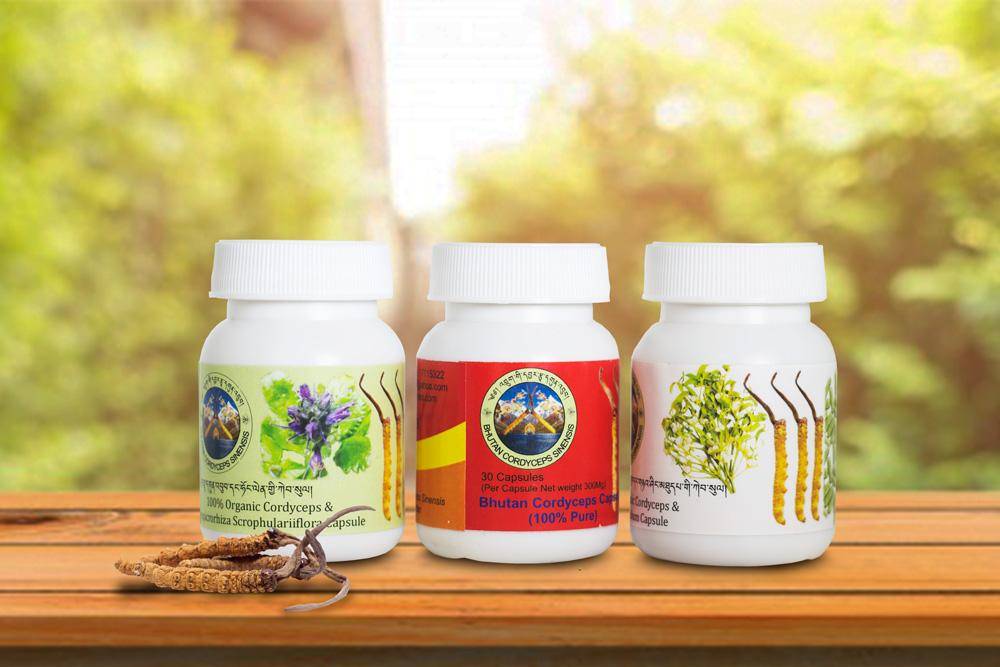 Not knowing how to start about with Cordyceps, start with cordycep capsules and supplements that will help you reap the benefits of this powerful mushroom

"An exotic form of mushroom, nowhere to be found except in the himalayas, also happens to be a miracle healer"